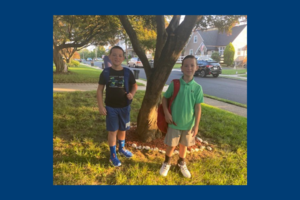 The Casmirri Family share their long and emotional journey on how they found Center School and how significantly that move impacted their lives.

Richard and Crystal Casmirri enrolled their twin boys Johnny and Richie at Center School in September 2020 after a long and emotional journey. After years of trying to do the “right thing,” eating organic foods, and paying for expensive therapies, Crystal and Richard knew the boys needed more.

Their journey began prior to kindergarten. Crystal observed the boys at their private school, and she saw some of the attention issues that teachers had spoken about. The educational team decided to meet every six weeks to update the Casmirris on their sons’ progress. They explored all kinds of therapies, including a private reading specialist who worked with Johnny and Richie after school with the hopes that she would find a solution to their boys’ learning delays. After seeking support from her pediatrician, Johnny and Richie were diagnosed with ADHD. The family thought they had found the right path, and the boys just couldn’t focus for long enough to learn. They finished out kindergarten with a plan, including extensive summer reading support from the reading specialist. As the boys entered first grade, the Casmirris attended a parent conference. They were told, “There is still a problem.” The school offered some reading support, and along with the private tutoring paid for by the Casmirris, Johnny and Richie began making slow progress. However, it was not enough to close the learning gap. Each parent conference that followed was distressing for Richard and Crystal.

Richard and Crystal decided to switch to their local public school. They outlined the services they felt the boys needed, which included Wilson Reading five days a week. The school told the Casmirris this would not be possible. After much back and forth with the school and being told certain critical services for Johnny and Richie were being modified without fidelity, they knew something had to be done. Every day the boys came home from school angry, upset, and frustrated.

Crystal began doing her research and knew she couldn’t be the only family whose children have dyslexia. Another summer passed, and the boys ended up
losing two levels of reading. After seven IEP meetings in one year, educating the school on strategies for her children, and looking at the data, the children were growing, but they were still significantly behind in their learning.

Then, Richard and Crystal found Center School. After being underserved for so long, it was life-changing for the entire family. Johnny and Richie really love coming to school and feeling accepted and understood. Their self-confidence has improved dramatically, and they are making educational progress for the first time in a long time. The combined commitment from the Casmirris, faculty, and Johnny and Richie is a true representation of the Center School Support Triangle. In just one year, Johnny obtained four years of reading growth, and Richie obtained three years.

Johnny and Richie have both said to their mother, “Thank you for finding my new school.” Crystal and Richard feel very blessed and fortunate to have found Center School.

We thank the Casmirri Family for sharing their journey with us and look forward to continuing to support Johnny and Richie in their growth.