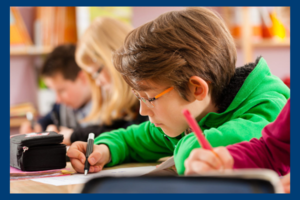 "Center School has made such an impact not only on our lives but on Garry’s too." Connecting with our families and learning about their journey is integral to Center School’s legacy.

“Joining Center School has made such an impact not only on our lives but on Garry’s too.”

Connecting with our families and learning about their journey is an integral part of Center School’s legacy, but it also allows us to showcase the dedication, grit, and determination of our students, families and faculty. We recently connected with a Center School family who have been with Center School since April 2021.

Keith and Sylvia began their journey when their son, Garry, entered kindergarten and began attending their local elementary school. The learning team recognized that Garry had some learning differences, but they wanted to give him a little more time to develop and settle into school. As Garry transitioned into first grade and then second grade, the differences became more pronounced.  Keith and Sylvia knew that Garry needed more and began the evaluation process for obtaining an IEP. The rest of Garry’s elementary years went by, and while they had a great learning team and Garry made some progress, the learning gaps continued to show.

The two reading programs his school used were not a good fit, and Garry was unable to grasp the concepts taught. Even a hybrid of the programs was still not meeting Garry’s needs.  His teacher at the time provided Garry with 1-1 Wilson lessons during summer school. But Wilson instruction, just during the summer, wasn’t enough. Garry made progress, albeit slow, as he moved into middle school, but the gap widened even more. He needed more intensive programming.

Every day, Garry’s parents would struggle to get him to school.  They shared, “It is hard to go back and think about where he was. It’s heartbreaking to see your child breaking down every Sunday, having a physical reaction to attending school.”  Their breaking point came during an IEP meeting when it became evident to Keith and Sylvia that Garry needed more than what the middle school could provide.

Garry was losing ground educationally, and his mental health was deteriorating. He wore oversized sweatshirts and hid within himself. Keith and Sylvia always volunteered to help, asked for resources, but they felt like they were failing Garry as parents. They asked themselves, “Who do we need to find to help Garry?”

That same day, they went online and began researching Center School. Keith and Sylvia had heard of Center School from a family friend whose son had previously attended. Garry’s parents attended a virtual information session that evening. During the presentation, they looked at each other and said, “It’s like they know Garry. They understand what he needs.”  The next day, Keith and Sylvia toured Center School and knew it was where Garry needed to be.

Garry is aware that he learns differently and knew his middle school was not the best fit for him. When Garry visited Center School, he told his parents, “Yes, I want to be here. Let’s do this”.  Garry was enrolled and began attending Center School soon thereafter.

Sylvia recalls, “I was waiting in the car line to pick Garry up from his first day, and I was so nervous. I took a deep breath and asked – So how was school today? Garry responded, ‘It was amazing.’”

Keith and Sylvia shared that the transformation was fast. Within two weeks, they saw this change in Garry, both academically and emotionally. School became a different experience for him. Garry felt comfortable around his peers. He didn’t feel self-conscious or worried about being called upon in class and not knowing the answers. He was surrounded by people who understood him.

Keith shared, “At one point, we thought we had picked up the wrong kid from school. He had completed all of his homework before he got home. Garry independently seeks out reading time for school and pleasure.  All of his anxiety has gone. I have watched my son transform from hiding himself, fighting every day about school to being a player on the soccer team, leading that team, and having the confidence to step forward.”

Keith and Sylvia shared, “Moving to Center School was one of the best decisions we have ever made. We always thought Garry was a very smart child. He is very creative, has a fantastic memory, and is extremely curious. Garry is part of his plan, he knows his goals, and everyone within Center School empowers him to own those goals.”

Since joining Center School, Garry has made tremendous progress and has become an active member of the school community.  We want to thank Keith and Sylvia for sharing their story with us and wish Garry continued success on his educational journey.